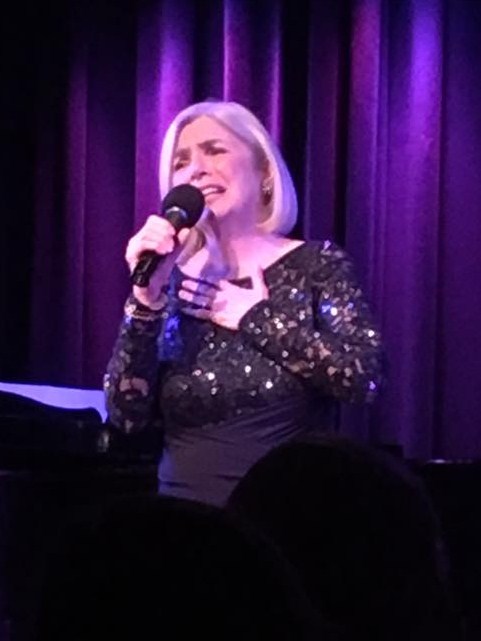 “Stewart has a voice to close your eyes and dream to”.

“In her show, ‘The Wizard of Words: E.Y. Harburg’ at the Laurie Beechman Theatre, Maureen Kelley Stewart pays tribute to one of the lyricists who helped make the Great American Songbook great.  With deceptive simplicity, she gets directly to the romantic heart of “It’s Only a Paper Moon”…We can feel the singer’s depressed disillusionment on “Brother, Can You Spare a Dime?”…Her take on “Happiness Is a Thing Called Joe” is sweetly introspective and she brings great sensitivity to her lovely, rueful rendition of “Last Night When We Were Young”….The evening’s highlight is “April in Paris” which Stewart infuses with a palpable sense of longing enveloped by a mantle of tristesse. This is hands-down the most emotionally potent interpretation I’ve ever heard – partly because she includes the rarely, if-ever sung verse, and partly because she is that good. What’s more, the emotions develop as the song progresses. It is a revelation.   Stewart has a sweet, pretty voice, but it is also capable of considerable strength – which she displays selectively and purposefully. Tedd Firth is the show’s musical director/pianist and as usual, his work is masterful.”

MAC Hanson Award winner Maureen Kelley Stewart, she of the golden voice and beautiful hair…has chosen to celebrate “The Wizard of Word: E.Y. Harburg” in her new show…with masterful arrangements and accompaniment by Tedd Firth…there were two great medleys – Harburg/Schwartz’ “Then I’ll Be Tired of You” and “Right as the Rain”, which may have been the first Broadway show about a feminist…The second medley was a series of songs from Harburg’s biggest Broadway hit, Finian’s Rainbow written with Burton Lane.   Kelley Stewart sensitively sang “How Are Things In Glocca Morra”, “Look to the Rainbow” and “Old Devil Moon”.

“She recognizes that Crosby was the supreme recording artist of the 20th century, and she’s done something coolly entertaining about it … A Pocketful of Bing [looks] long and lovingly at aspects of Der Bingle’s movie and recording career…”